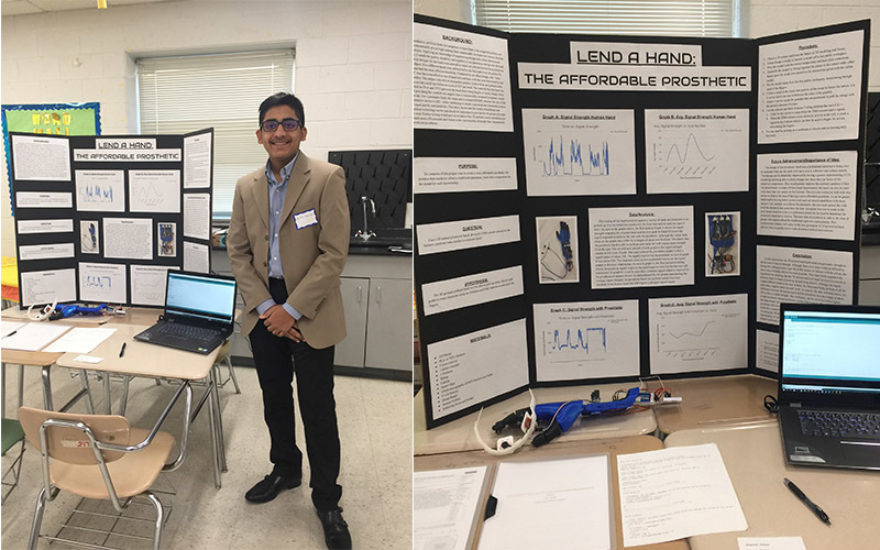 PLTW Biomed Had an Immeasurable Effect On My Career

Aditya Shankar is a sophomore at Triangle Math and Science Academy in Cary, North Carolina, and is an avid builder of affordable medical devices.

Over the past two years, I have learned more about the biomedical field than ever before. Taking Principles of Biomedical Science and Medical Interventions has greatly increased my understanding of medical devices – so much so that I've started to build them for my regional science fair.

Recently, in Medical Interventions, we learned how a prosthesis works and the cost of high-end prostheses. As a result of this lesson, I was driven to produce a low-cost, effective prosthesis. I used a 3-D printer to build a fully functioning prosthetic limb, which was about 1/100th of the cost of a regular prosthetic limb.

This isn't the only time that a PLTW Biomedical Science class has inspired me to create a medical device.

In ninth grade, during Principles of Biomedical Science, we learned about numerous diseases and how they manifest themselves in our body. One symptom we learned about was vision impairment from late-stage diabetes.

To help counteract this devastating symptom, I decided to create a Smart Cane. Using a folding vision support cane as a base, I added a microcontroller, a vibration motor, and an ultrasonic sensor. For just about $15, I was able to create a device that could improve the day-to-day safety of the millions of civilians affected by these symptoms.

The effect that these PLTW courses has had on my career is immeasurable. I've always been determined to go into a biomedical or engineering field, but to be introduced to the vast expanse of the two fields combined has opened up even more career paths for me.

How a Class Changed My Views on Life