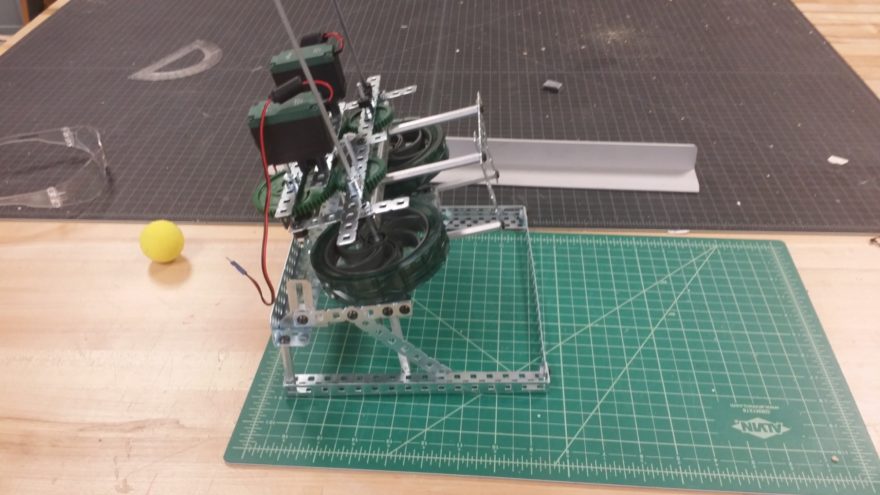 The Power of Listening to Others’ Ideas

Garrett Williams is a junior in high school and a PLTW student at Lenape High School in Medford, New Jersey. Garrett has used VEX kits extensively, as well as Robot-C programming. Besides engineering, Garrett does graphics for his school's TV broadcasting club and has also started his own business doing game development and freelancing.

Recently we were assigned a “Battleship” project in which we had to create a machine to angle and shoot a projectile and hit a certain square tile on the floor, “sinking” our classmates’ ships. Our teacher explained it thoroughly and gave a few suggestions, and we went on our way.

Immediately, I thought of a pitching machine sort of device and began constructing it. After several weeks of work, I had “finished” the prototype. However, it was extremely underpowered, only shooting a max of four feet to the required 14. The design was also complicated, with many moving parts and several VEX robotic components.

The day before the project was due, I asked my teacher for help. I was stressed out and lost. He told me to scrap the pitching machine part and use a piece of flexible metal to hit the ball. Thirty minutes later, I had a design that could shoot 14 feet. He said that he suggested that design to us on the first day, but I hadn’t considered it. I just went with my own complicated idea.

On test day, my design performed decently overall, but great considering I pretty much built it in a day. Had I used the metal on the first day, I would have had plenty of time to perfect my design, making it more accurate and consistent. Instead, I had to scramble, which ended up costing me.

The moral of this story is listen to other people’s ideas, especially your teacher’s.

Yes, your idea may be successful, but when a teacher with experience says something, you should probably listen. That’s not to say that you should automatically go with whatever others suggest. Maybe your idea is great and will do even better than theirs. I just suggest that you take their ideas into consideration.

Engineering is a field that requires you to work with many people with many different backgrounds, talents, and thoughts. If you're designing a rocket ship, you are going to be working with programmers, scientists, physicists, welders, pilots, etc. Although there will be collaboration among them for the integration of all the systems, these engineers stay in their areas of expertise and experience. A person working on the fuel system shouldn’t be designing the control interfaces, and the engine fabricators shouldn’t be calculating the descent angle.

In a classroom environment, it is hard to see, but each person possesses a different strength. I'm in a class with baseball players, programmers, robot makers, and a bunch more with different talents. There have been projects I have worked on in the past that have been more successful because I was working with someone of a specific talent that benefited our design.

The same could be said for my teacher. He is involved with the robotics team, and robotics competitions often involve challenges similar to the “Battleship” challenge I faced in class. When my teacher gave a suggestion, I should have listened. On the flipside, since I’m stronger in the area of software, he should listen to my suggestions.

There’s a saying I really like: “Jack of all trades, master of none.” You can’t know everything inside and out. You can only know one or a few things really well. If you're put in a situation where you have no experience, you should consult someone who has experience. There is nothing wrong with seeking help. In the end, when working with a team, you will all have your strengths and weaknesses. What makes a great team is when you utilize each person’s strengths to overcome one’s weaknesses.

The Total Eclipse: An Eye-Opening Experience