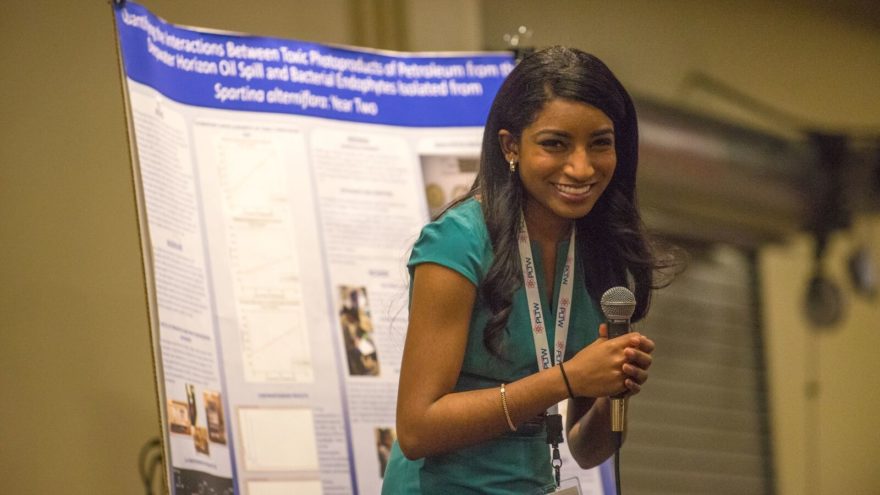 PLTW alumna Keiana Cavé is an entrepreneur and a chemical engineering student at the University of Michigan College of Engineering.

Cavé was recently named to Forbes 30 Under 30: Energy Class of 2017 in recognition of her nanotechnology- and bacterial and fungal endophytes-focused independent chemical research on the Gulf oil spill, which she undertook when she was a 15-year-old student at Lusher Charter School in New Orleans, Louisiana.

“I started doing lots of chemical research in high school, and that was pretty much due to the fact that I joined the PLTW program at my school and started doing engineering classes freshman year,” she says.

Through her PLTW classes, Cavé connected with mentor Mr. John Morrow, a PLTW Engineering teacher at Lusher Charter School, and was empowered to build a strong foundation that’s continued to support her academic and career goals.

Now, her research has resulted in two published scientific research papers and two patents. She has also raised $1.2 million in funding from Chevron to continue her research at the University of Michigan. Furthermore, Cavé’s work has also been recognized by the likes of the Intel International Science and Engineering Fair (ISEF), NASA, and MTV.

Read on for excerpts from our conversation with Cavé, who spoke with us by phone from Barcelona, Spain, where she delivered a TEDx Talk titled "The Power of Being Obnoxious."

PLTW: How has the PLTW Engineering program been relevant to your life after high school?

Cavé: The curriculum in high school prepared me a lot for the engineering classes that I had to take my freshman year at Michigan. I know I was very nervous accepting the offer from Michigan because I know that they're a top-five engineering school, and I wasn't sure that I was prepared for the rigor that it was going to require.

When I got here, I took all of the required freshman intro to engineering classes, the ones that they kind of say, "Oh, if you don't pass these, then maybe you shouldn't be in engineering" – those kind of classes.

The first class I took, it was a design course. Basically, we went through the whole design process to the point where we could patent our ideas. We didn't actually patent them, but it was kind of theoretical. It reminded me a lot of the engineering design process that we followed in high school, and I knew exactly what to do. I felt very comfortable in that class, and I know that a lot of the other freshmen were intimidated.

It definitely prepared me in not only the design process, but we took a coding course the next semester, and I was also very prepared for that. It really came in handy and the curriculum is extremely relevant, considering Michigan is a top-five engineering school and we were pretty much doing all of that work in our freshman year. It was insane.

I actually remember one of my old PLTW binders, I had my mom send it to me in college because it had so much of the material that I needed.

PLTW: What PLTW class projects or activities stand out as favorites?

Cavé: My favorite was definitely during my third year. It was the aerospace course, and we had this competition to see who could build a glider that would fly the farthest and the fastest and have the highest apex. There was this list of criteria. My partner and I actually won that competition. It was my favorite because it was some friendly competition between classmates.

PLTW: What elements of your PLTW classes have you been able to take and apply to the different entrepreneurial projects that you've taken on?

Cavé: We were really forced in the PLTW classes to learn how to present, whether we liked it or not.

I know something common among engineers is that it's really easy to hole up in a library and be antisocial, but it's also really important to be able to share our work with others in a way that they can understand because sometimes it can get very technical with a lot of jargon.

Sometimes we would be sitting in class, in PLTW, and the teacher would say, "OK, you have 30 minutes to prepare this presentation." We all hated it at the time, but it actually happens a lot in college where we have a limited amount of time to prepare a presentation. It comes up a lot in entrepreneurship, too, so I think that that is the thing from the class that made me a better entrepreneur.

PLTW: How have you approached overcoming challenges in your studies and in your career?

Cavé: I actually struggled first semester, just because I really wanted to do kind of my own projects. For example, I had all that funding from Chevron, and so I really just wanted to be in my lab all the time, working on that project. That was one of the reasons that Michigan had brought me here.

Once I realized that I really couldn't stay at my lab until 4 a.m. every day because I had other homework to do, it was kind of a tipping point for me, and so I just kind of learned that you have to recover. You can't just dig yourself into a hole and stay there, even though it seems kind of impossible to dig yourself out. It is possible to kind of teach yourself that material, even if it takes kind of getting a tutor or other engineers to help you. They're very collaborative. It's really important to constantly feel motivated even when you're doing, or it seems like you're doing, poorly.

PLTW: What does it mean to you when the work you do results in solutions to real-world problems?

Cavé: It's insane to me. I look at the payoff, and it's that result that motivates me to do that research or whatever project it is that I'm doing. It's just validation that, yeah, all of the time that I've spent working on this wasn't for nothing.

PLTW: What one piece of advice would you share with current and prospective PLTW students across the country?

Take the PLTW classes seriously. When you're in a class and when you're in high school, in the moment, you don't really understand the value of the work that you're doing until you leave and you have those binders, your past work to reflect on, and you really see how much you've grown from the beginning of the course to the end. I'll admit there were some topics in the class that I didn't take seriously enough, and I'm looking back and I wish that I had. I wish that I had learned it properly. I'd say definitely take every single aspect of the course seriously because it is there for a reason and it is there to help.