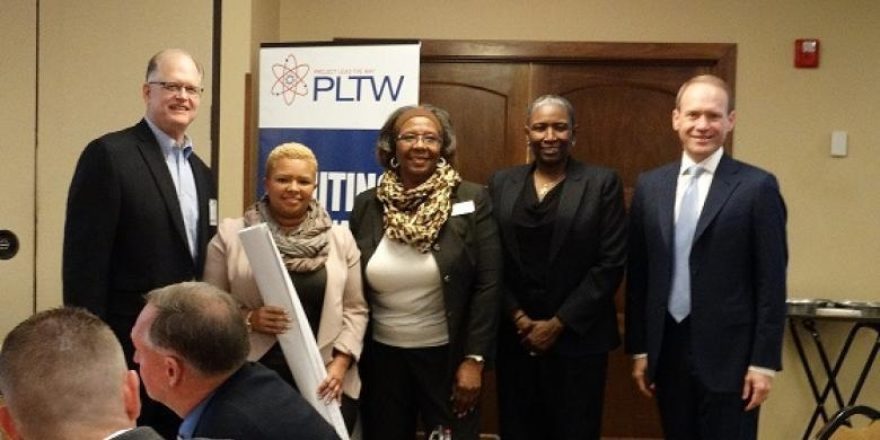 On the Road with Vince Bertram
|
|
On The Road Success Stories

When Dr. Tiffany Anderson joined Jennings School District in Missouri as superintendent in 2012, the district had just started exploring Project Lead The Way as an option for Jennings Senior High School. Fast forward just three years to today, and every school in the district has PLTW. The district was recently recognized by PLTW CEO and President Vince Bertram at the PLTW Missouri State Conference for providing “All Access” to PLTW for every student. For Anderson and Jennings School District, the need was clear and the work was urgent.

“We really don’t have time,” she said. “If you’re thinking about a program in three of four years – kids are dropping out already right now. If you’re interested in ‘All Access,’ there has to be a conscious choice in where you’re going to spend your time and energy.”

Anderson attributes the accelerated expansion of PLTW to a clear commitment to students, a sentiment echoed in the JSD theme for the 2015 school year: Students First: Transforming Schools and Communities.

“As you look at moving a district forward, remember that our only barrier is our mindset,” Anderson said. “The next steps follow naturally. Where you put money is directed by where your priorities are.”

After implementing PLTW Biomedical Science and PLTW Engineering in the high school, Anderson was candid that the biggest challenge to expansion was resources.

“One of the things that causes you to hesitate is finances for training and equipment,” she said. “But we made a conscious decision that we were going to invest in our students. We decided we were going to make a real investment in STEM education, and particularly in PLTW.”

Jennings School District does not have a curriculum or professional development department in the district. With pride, Anderson says that her curriculum team consists of her and her teachers.

“We have a lean central office, and that frees up money to go straight to the classroom,” she said. “You have to buy textbooks and materials anyway, so why not use that money to participate in PLTW if you believe in that.”

Anderson said one of the greatest joys of implementing PLTW has been seeing the transformation for teachers.

“For our classroom teachers, it’s really about inquiry,” she said. “It’s not a science piece; it’s about having students think at a different and deeper level.”

“It makes it more simplistic and addresses the turnover issue,” she said. “It was a risk factor because you were hiring people and investing in them and they may move on. But we make it clear what we invest in, and we make that investment for our kids.”

For Anderson, the district’s story has been compelling because of the outcomes they’ve seen. One hundred percent of Jennings’ student population qualifies for free or reduced lunch. Despite this challenge, they have seen gains in all academic areas through PLTW.

A Conversation with Stephanie Cunningham