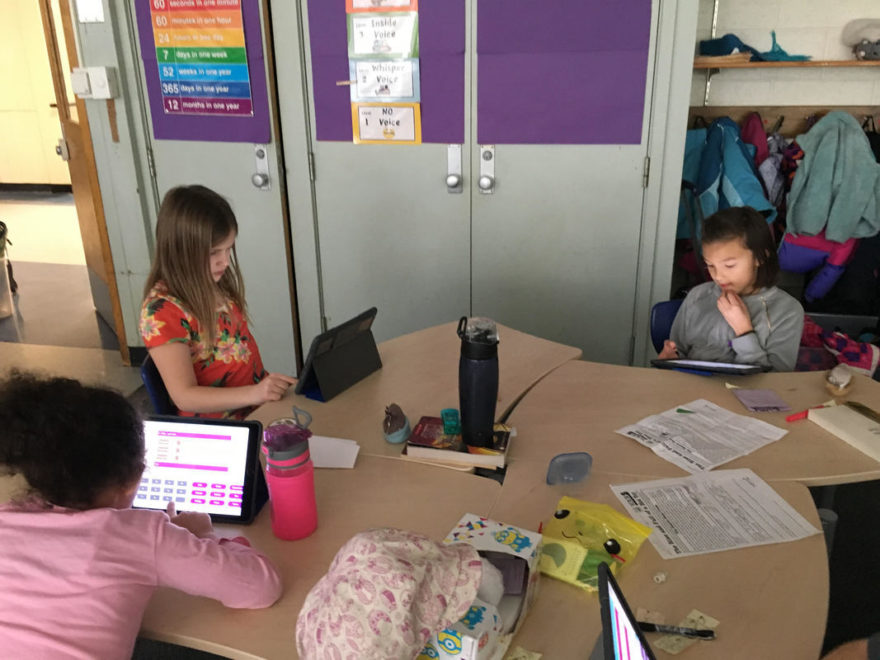 This past fall I walked into one of my classrooms as students were finishing a math lesson with their classroom teacher, and a student called out, “Ms. D is here! NO MORE MATH!”

I was surprised by the reaction because this class loved coding, and there was so much math involved in our latest projects. At that moment I knew I had to let them in on the “secret” that successful programmers – including the students themselves – use math all the time.

I displayed a student’s project on the board and showed the class how we had used knowledge of multiplication and division to grow and shrink actors. I shared that we had also been using greater than, less than, and equal signs in conditional statements. Students were amazed as they began to truly notice that the concepts and symbols in the programming app were identical to the ones they were familiar with in the math lessons they had been having all year.

Moments such as this emphasize the incredible cross-curricular connections provided within the PLTW curriculum. Just one conversation can help students to realize that they are, in fact, doing math and loving it. In my own classes, making the math connections clear has impacted the way students feel about math and coding alike.

There are strong connections to be made in every PLTW Launch computer science course; however, third grade Programming Patterns has been the most transformative in making math-PLTW connections within my schools. For instance, third graders play the unplugged game Rosie’s Path the first week of programming. In the game, students need to create a sequence of directions to get Rosie home using movement cards such as turn right, move forward, and jump. One of the first challenges requires Rosie to spin, even though there is no card for spin. My class had a strong foundation in fractions, and when I mentioned the terminology of one whole spin, students confidently suggested Rosie use four right or left turns, remembering four quarters will make one whole. Students used their background knowledge to tackle this challenge with excitement instead of hesitancy.

Equally strong connections to math were made while programming in Hopscotch. In Activity 3, students learn to program a function that makes the actor draw a square. My third graders had just covered attributes of shapes prior to the PLTW module, so I asked questions for students to recall this knowledge prior to coding. They remembered that to be a square, the shape needed to be a quadrilateral with equal sides and also needed to have four 90° angles. Once we actually got into the app and began exploring movement and turn blocks, many students began to make squares and other shapes without any official directions! They also knew about the attributes of triangles and rectangles, so these easily became part of their code sketch designs. Their knowledge of geometry opened up new and exciting possibilities, and students were empowered to take ownership of the more unique programs they were creating.

Why are these connections so important? Mathematics is an integral part of STEM education. The programming modules are one more tool to help educators demonstrate the authentic and captivating ways students will use math in the real world. For my students, programming enriched their understanding of math. It also opened more doors for creativity and ownership during PLTW as they realized math gives them the power to create more complex and interesting programs. Knowing this encourages me to believe that we can inspire even more students to develop a passion for all things STEM, including the “M”!