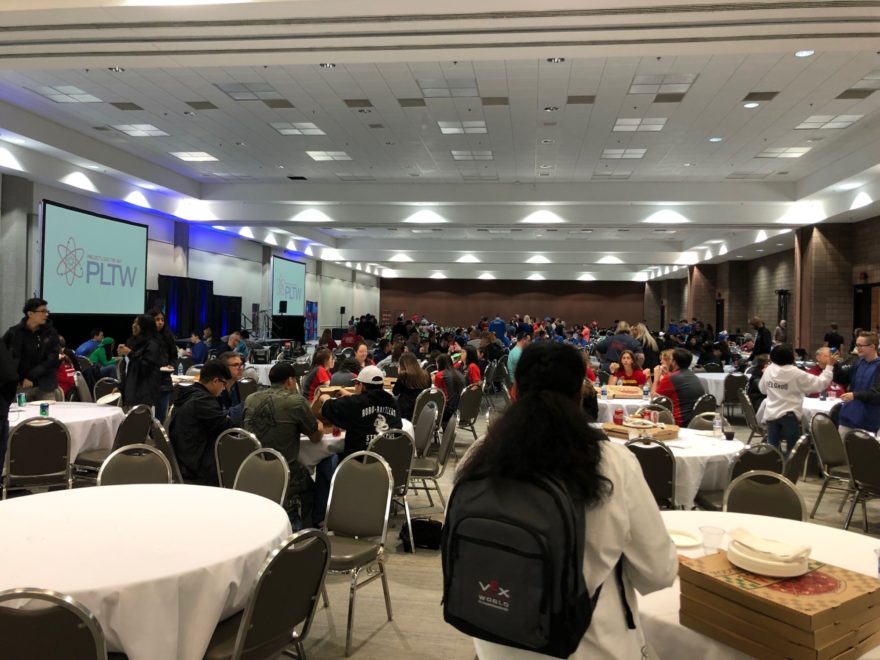 Stacy Reynolds was teaching in Star City School District when she received a call from her alma mater, McGehee School District, about helping start the high school’s PLTW program. She was involved in competitive robotics in Star City, so she had one condition for making the transition.

“The opportunity to move home and help my school was too good to be true,” she said. “The one condition I had was that I be able to start a robotics team. I was [overseeing] middle school robotics in Star City and had become hooked.”

Even though the school leaders were skeptical about students signing up, they agreed. When they posted the chance for students in grades 8-12 to sign up for the team, more than 70 students expressed interest.

“After introducing what robotics is, going over rules and guidelines, and setting expectations, we still had 50 students sign up,” Reynolds said. “These 50 students composed nine different teams that competed all year.”

The teams competed and exceeded expectations. Of the nine teams, six qualified and attended the state championship and the Create US Open in Council Bluffs, Iowa. One middle school team, The Geeky Hamilfans (Geekys), and one high school team, The DJs, qualified for VEX Worlds.

While qualifying for VEX Worlds is an exciting accomplishment in itself, the students were also developing skills that are in high demand across industries, such as the ability to solve problems, to collaborate, and to persevere through failure.

Combined, the two teams completed eight iterations of their robots. The Geeky Hamilfans battled loose wheels all season, and The DJs never had time to do a complete autonomous attempt. Besides the technical issues, the students worked through team issues.

“The Geekys determined working with best friends was not always the smart thing to do, because if disagreements are not handled correctly, they can lead to loss of friends,” Reynolds said. “The DJs argued over who would be the driver but worked it out as a team.”

Their work paid off, though, when the students competed at VEX Worlds in Louisville, Kentucky, in late April. Reynolds said the support of the students’ parents made a tremendous impact as they helped get the teams to the competition and cheered them on.

Reynolds shared the value she sees in competitive robotics for her students.

“Kids get to travel outside of our small town, possibly for the first time,” she said. “They get to meet new people and experience new things. They learn the value of teamwork, integrity, and respecting others.”

This is the first school year McGehee Schools implemented PLTW Engineering and PLTW Computer Science, and they plan to expand offerings to include PLTW Gateway next year. Reynolds’ optimism for the future is apparent when she talks about the growth of the program.

“The projected growth of our PLTW classes next year is at least double the number of students,” she said. “That’s not too bad for a 100% free and reduced lunch school district in the middle of the Arkansas Delta.”

Alumnus Strives to Get Wings in Aviation Program

PLTW Biomed Had an Immeasurable Effect On My Career