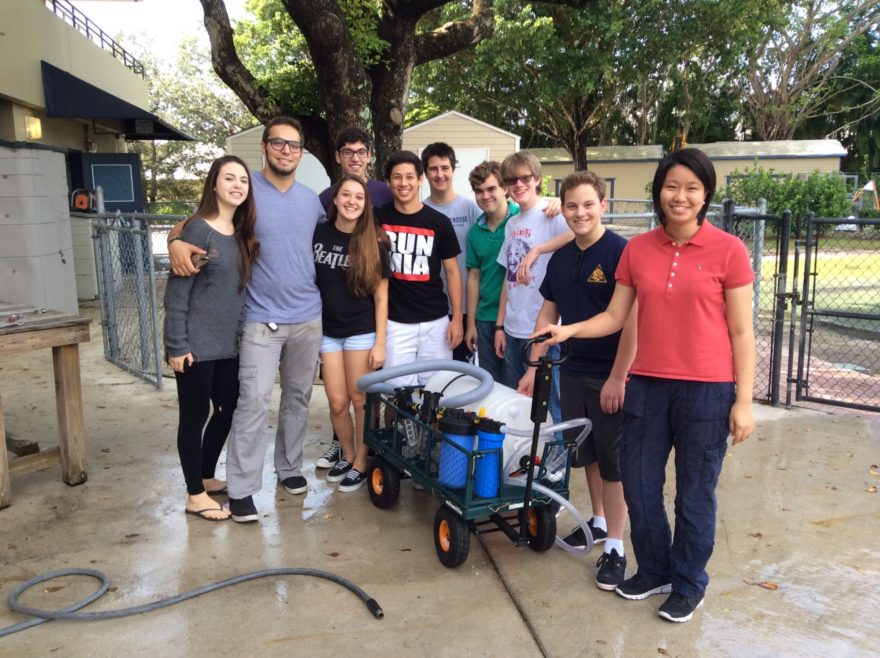 Educators know that young people accomplish the most when they learn by doing – and students at Miami’s Gulliver Preparatory School are learning even more by doing good for others. Their Project Lead The Way engineering projects are breaking new ground and improving the lives of people in developing nations around the world.

Looking far beyond their own classroom, students are providing innovative, life-changing solutions to disadvantaged communities through the school’s G.R.O.W. (Gulliver Reaching Out Worldwide) initiative. Their ongoing efforts, begun in 2009, are expanding as succeeding classes of Gulliver students build upon the work of their predecessors.

In many regions of the world, the need for pure water is acute, and the challenges are daunting. The magnitude of the problem is stunning, according to Schuyler Reinken, an engineering student involved in the G.R.O.W. program.

“Worldwide,” he says, “780 million people are living without access to adequate supplies of clean water. Each year, 3.7 million individuals die from water-related diseases – a number equal to the population of Los Angeles.”

Fellow student Sara Fuenmayor cites an example from an area she visited in Africa. “In Nigeria, children have to walk miles to a river to collect water for their families and communities – and that water is contaminated. It’s gotten many people sick, especially newborns, which is why Nigeria has a very high infant death rate. It’s a very, very tough situation.”

Delivering Solutions to Those in Need

In response to this challenge, Gulliver students developed their Liquid Treatment System, or LiTreS device. Students developed the initial version in response to the devastating earthquakes that rocked Haiti in 2009. They sent the prototype system to an orphanage there in 2011, where it now provides 300 people with clean water daily. Based on that experience and user feedback, Gulliver students have transformed the original design into a smaller, less costly, and totally mechanical version that operates via a hand pump, eliminating the need for a power source.

Compared to heavier, more costly, and more complex filtration systems, this one is elegantly simple and superior for small-scale applications, Reinken notes.

“When we built LiTreS, we wanted to make sure it was light, portable, easy to use, and didn’t require electricity, yet could provide immediate results, producing clean water in only a few seconds,” he says.

The machine, mounted on a collapsible cart with air-free tires, is built around a plastic reservoir, which is used to store the clean water if it’s not being immediately dispensed through the exterior spigots. An intake hose is placed in the water source and the impure liquid is drawn up and propelled by a hand-operated rotary collection pump. In mere moments and with minimal effort, the device produces potable water.

“The water is put through four different filters,” Reinken explains. “The first two are sediment filters that take out all the macroscopic particles that you can see, like dirt. The third filter acts on the microscopic level, getting rid of the unseen contaminants. The final one is a silver-plated NanoCeram® filter that removes all of the bacteria and viruses that make people sick.”

“LiTreS is very easy to ship within a large suitcase or standard shipping box,” says Louis Hamilton, another member of the design team. “It can be assembled by two people in 10 minutes, with no tools required for assembly.” Maintenance is similarly easy, with quick release connectors that allow the components to be removed and reattached whenever filters need to be replaced.

As students engaged in the G.R.O.W. program learn by doing, they gain not only engineering skills, but also valuable, in-demand experiences and expertise in other fields.

“Each group has students assuming important roles, such as a project manager and individual heads of engineering, visual design, marketing, and other areas of responsibility,” Project Lead The Way teacher Claude Charron says.

This interdisciplinary approach gives students the opportunity to pursue and develop a number of relevant interests and skills in a variety of areas – for example, video production, project financing, and the patenting process.

“The students really enjoy using the video component within Inventor® Studio,” Charron explains. “This has allowed them to create animated presentations to demonstrate their projects to outsiders, who have been instrumental in helping our school acquire seed money to develop our projects. They’ve also produced working drawings using the software, which has helped in obtaining patents. Our engineering department has received six patents pending over the last few years through our use of the software.”

Making an Impact Around the World

Charron has seen the LiTreS initiative – one of several student projects designed to help people in need – develop and grow as part of Gulliver’s PLTW program. “Initially, there were five to eight students who designed, built, and tested the original design,” he says. “After proving the concept, the students decided that they wanted to develop a more practical and compact version that would be easy to manufacture and deploy in large numbers.”

Gulliver’s LiTreS design won the Conrad Foundation’s 2012 Spirit of Innovation Award in the Clean Energy & Environment category, which included a $10,000 grant that has been used for further development of the concept and obtaining a patent.

“In subsequent years, there have been 15 to 20 individuals involved with all aspects of the project, and there are now systems in five different countries,” Charron continues. These updated, functioning systems are now in Haiti, Argentina, Nigeria, Kasai (The Congo), and The Philippines. “Over that time, students have made improvements based on customer needs. … The next step is for teams to complete their plans for mass production and acquire a full patent.”

The goal is to produce 10,000 of the items over the next several years for deployment in developing countries around the globe.

“We plan to achieve this in three steps,” Hamilton says. “First, we’re making minor improvements for easier repair and maintenance. Second, by itemizing all of the parts, we’ll reach out to wholesale suppliers so that we’ll be able to achieve a better final unit cost. After that, we will create a business plan that will allow us to realize our goal.”

Furthermore, the G.R.O.W. initiative’s continued momentum has served as a catalyst for a number of other PLTW projects at Gulliver Prep with the aim of a positive global impact.

Another such project by Gulliver Prep engineers is the Eco-Cooker, which is a unit that utilizes biogas to provide a safe, sustainable way to cook for people living in rural Nigeria. The tool addresses head-on two challenges faced by Nigeria and other developing nations: 1.) high smoke inhalation mortality rates as a result of unsafe cooking practices using firewood and 2.) deforestation. This project was selected as a national 2013 Conrad Foundation Spirit of Innovation Challenge winner.

“Because of the success of the water filtration system, our students are engaged in many activities that address global challenges,” Charron says. “There are now more than 200 students taking PLTW courses in grades 9 through 12.”

Tags: About Us
Categories
Stay Connected!