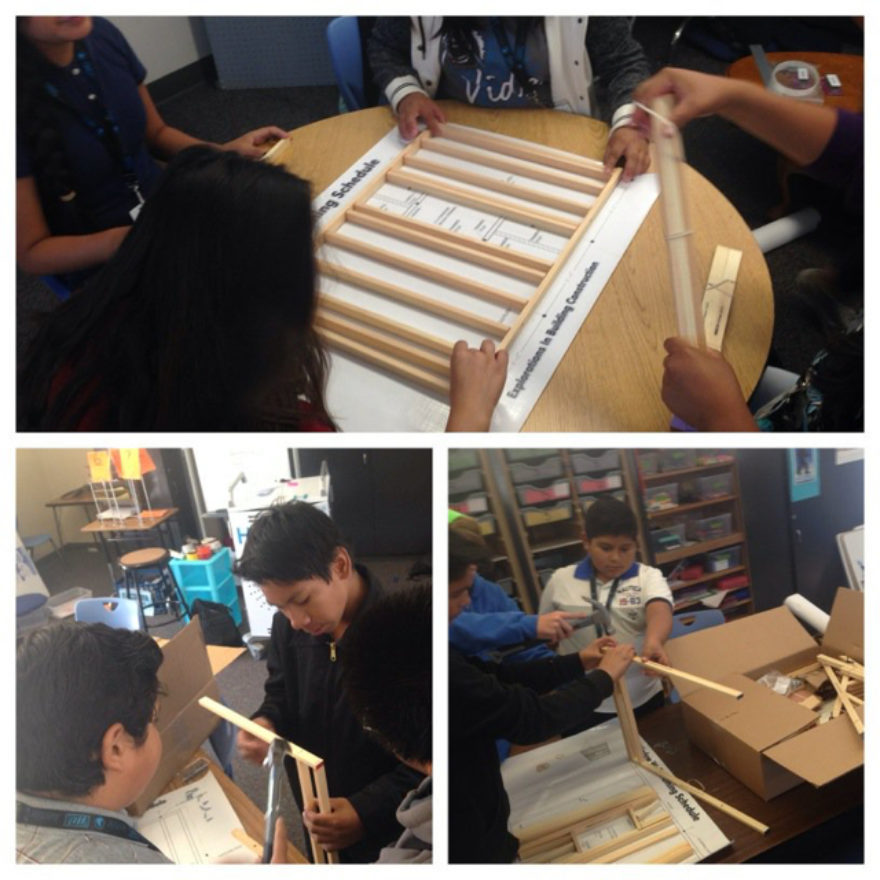 Ellen Crews teaches math and innovative STEM classes at Vista Innovation and Design Academy. Ellen is the co-chair of the school’s steering committee and works with other teachers on incorporating design thinking into their curriculum.

David and Juan. These two boys sat in the back of my Green Architecture classroom every day. They did not seem to care much about the curriculum. They goofed around, ripped up papers, tried to look tough, and tried their best to make sure the entire class knew that they were not going to engage in any way. To make matters worse, David was also in my math class, so I got to experience the joy of having him as a student twice each day. Then we started the construction project in the Green Architecture curriculum.

We started by building a scale model of a framed wall. As we were going over the placement of wall studs, David raised his and explained the importance of accurate spacing and related it to knocking through a wall at his grandmother’s house to install a new cabinet. Suddenly he was the expert, a position he had never held in a classroom, and his fellow students paid attention. The next day, he worked on solving a complex problem in math. Wow!

In our next phase of construction, my Green Architecture students needed to frame and build a scale model of a shed. David and Juan got right to work, amazed that I would hand them a hammer. They were generally ahead of the rest of the class and produced some amazing work. Another group was struggling, and could not figure out what they were doing wrong. Juan walked over, took one look at the project, and told them they were using the wrong type of nail. When they questioned how Juan knew this, he replied, “I read the directions.” This stood out to me because Juan’s reading level was about four years behind his grade level, and he normally did whatever he could to avoid reading. The boys finished their project early and then circulated around the room, helping other students. The next day, David raised his hand in math class.

Our school held an expo where students could showcase their projects. The class decided that they wanted to have a shed under construction at the expo so that parents and community members could see the process. I needed volunteers to take shifts throughout the evening, and David and Juan were the first to raise their hands. They showed up early, worked diligently, and fielded questions from a variety of interested attendees. They stood tall and rose to the occasion, and I could see the pride in their eyes. David received a passing grade in math because he was willing to try and trusted me and his peers to celebrate his successes and embrace his failures as part of the learning process.

A few days later, Juan was waiting for me in the parking lot when I got to school in the morning. He asked if he could switch to my math class because he was not passing his current class. We made the change and on the first day he paid attention and did his best to contribute to his team. The next day he solved a relatively complex problem. By the end of the quarter, he had a solid B and was beginning to think he could pass all of his classes.

So, what happened? The Green Architecture class allowed me to connect with students. I handed them a hammer to build a wall, and in the process we built a relationship with a foundation of mutual trust. This relationship bled over into my math class, and made both boys more willing to try. More importantly, with those hammers, they became class experts and built their confidence. They started to see themselves as capable and trustworthy. They started to care about their education and plan for their futures.