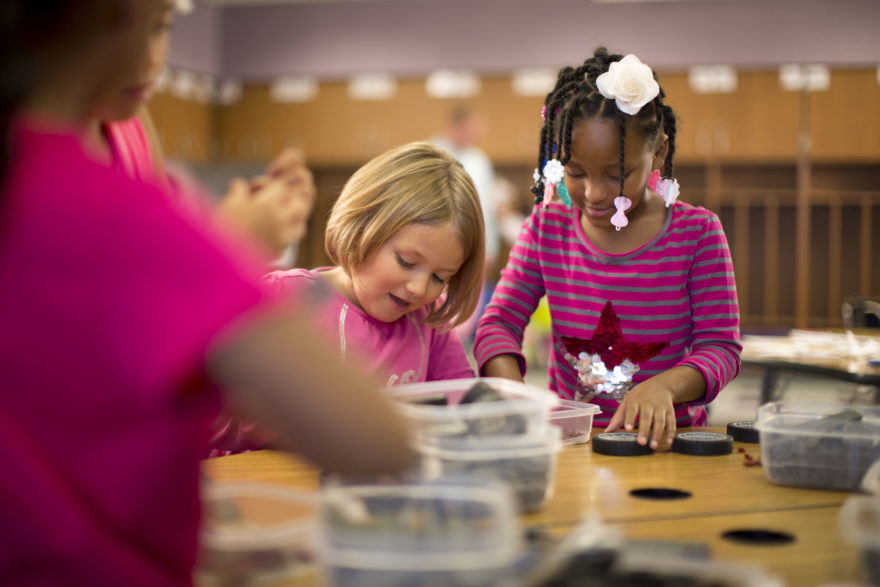 Situated in the heart of northwest Oregon’s Silicon Forest, Jackson Elementary is a school with a high level of parental involvement and volunteerism.

“One of the things that makes Jackson fantastic is the community involvement,” says David Linn, parent of two Jackson students and an active classroom volunteer. “The families that come in definitely have an education mindset.”

Thanks to that community and parental involvement and overwhelming support from the school’s parent-teacher association, this year the elementary school implemented Project Lead The Way’s brand-new world-class science, technology, engineering, and math (STEM) curriculum, PLTW Launch.

Mary Hall, a third-grade teacher at Jackson and a champion of the PLTW implementation effort, first became familiar with and interested in PLTW through her son, who is also an educator teaching PLTW’s middle school curriculum. While conducting online research, Hall discovered PLTW’s new elementary-level, hands-on, project-based STEM program and set out to learn if it would be a good fit for Jackson.

She examined PLTW Launch, finding merit in its attributes, such as the program’s alignment with The Next Generation Science Standards and the program’s robust professional development for educators. To explore further, Hall spoke to with local middle school and high school educators at PLTW schools; in these discussions, she got resoundingly positive feedback on the value of PLTW programs.

During this process, Hall became passionate about bringing PLTW Launch to her own school.

In company with other champions, Hall worked hard to introduce the cutting-edge, immersive PLTW Launch curriculum to Jackson’s stakeholders, picking up steam and support from parents and educators along the way. Jackson’s principal, David Lee, lent his support and announced the school’s intention to implement the program.

“Our community is very technology-minded, so I think all the parents were very excited to hear about it coming,” said Sara Yager, parent of two Jackson students and PTA president for the 2012-13 and 2013-14 school years. “Parents were overall very supportive of any way to bring more science and technology to the classroom.”

“Our families recognize no matter what job you’re doing, you’ve got to have some technological expertise,” she says. “They want to make sure their sons and daughters are being inspired to be in technology and engineering early on.”

With parent, educator, and administrator support for PLTW Launch firmly in place, Principal Lee approached the PTA to arrange the program implementation financing.

Having hosted two successful fundraisers – a fun run and an auction – earlier in the school year, the Jackson PTA was willing and able to support PLTW Launch funding and committed to match sponsor contributions.

When the PTA Budget Committee put the PLTW funding to a vote, it sailed through smoothly and received full PTA board support.

“It was unanimous at the meeting that that is where we wanted to spend that money,” Yager says.

The PTA’s pledge not only provided financial backing, but also hastened Jackson’s mission of securing sponsors.

“The fact that the members of the PTA came to the table early and were supportive was a game-changer,” says Ed Dennis, PLTW director of school engagement for Hawaii, Idaho, and Oregon.

“From then on, the school was able to emphasize the match when seeking contributions – a real confidence-builder for donors.”

Indeed, after the PTA agreed to match funding for PLTW Launch, the organization was also able to garner donations from sponsors including First Tech Federal Credit Union, Rockwell Collins, Synopsis, and Genentech.

Yager recommends this approach to other parent-teacher organizations working to get PLTW implemented.

“Any money that you can provide ­– even a small amount – can help to attract sponsors,” she says. “Making such a pledge encourages businesses to sponsor, because it shows the commitment to continuity and continued support for the program.”

At Jackson, PLTW Launch went from a topic of conversation to a presence in the classroom in just a few months.

Over the summer, five Jackson Elementary educators immersed themselves in the PLTW Launch curriculum at Core Training and have since shared what they learned with each other, as well as with other teachers at the school.

Though the academic year has only just started, PLTW Launch teachers at Jackson Elementary are seeing early positive results from PLTW Launch.

“We’re already experiencing the effects in the shift of our mindsets,” Hall continues. “We’re looking at technology in a new way. Our whole staff is extremely excited.”

She continues, “One of the things we really like about the curriculum is how developmentally appropriate it is for kids. It capitalizes on children’s own wonder and curiosity and draws them into the learning process.

“We’re giving them a firm foundation. We’re giving them the technology and resources they need,” she says of herself and her colleagues. “But the students are constructing their own knowledge, and there’s a strong ownership and strong engagement as a result of that.”

A First for Everything