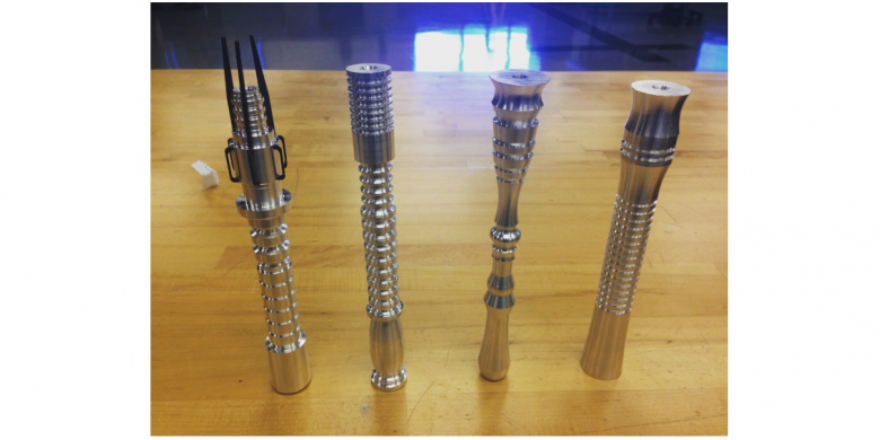 PLTW teacher Benjamin Brzezinski of Niles North High School in Skokie, Illinois, challenged his Computer Integrated Manufacturing (CIM) students to apply their engineering knowledge and skills through an out-of-this-galaxy project: designing and manufacturing their own lightsaber hilts. Check out Project Lead The Way’s interview with Mr. Brzezinski below.

Project Lead The Way: Why did you choose to integrate the lightsaber project into your CIM class?

Benjamin Brzezinski: First off, I’m a huge “Star Wars” fan! Earlier this school year, I was trying to think of a project that my students could do that incorporated the lathe, which is still a vital part of manufacturing. Around that time, one of my colleagues asked if I was going to try and incorporate any new projects into CIM or Introduction to Engineering Design (IED). After that conversation, he mentioned the new “Star Wars” movie, knowing I was a fan, and said, “Too bad you couldn’t do a project for that.” And then it hit me: The lightsaber hilt is essentially a cylindrical object! I could turn a lightsaber hilt on the lathe and add rapid prototyped attachments later on after machining was done. Perfect!

PLTW: How is this project different from what students might typically experience?

BB: Having something like a lightsaber hilt to design to cut seemed like a great idea because it captured the attention of my students, being such a pop culture buzz right now. It’s about finding something to engage the students that’s interesting to them but still making sure they learn the important facts about machining.

PLTW: In what ways were you able to help your students connect this project to the real world?

BB: By giving the students the project, they had more invested in it because they were the ones coming up with the original design. They had to calculate the speed and feed of the tool and material, and after all were finished, the students had to go back and figure out the material lost in the process and figure out how much money was lost through that. So: calculation of speed and feed and of material lost. They learned how much money was wasted by material loss and how to set up and run a lathe.

PLTW: How has your school and greater community reacted to the project?

BB: Check out the news piece done for the project, and you will see how much people enjoyed it. It has been a big success with the administration, students, and all of Chicagoland.