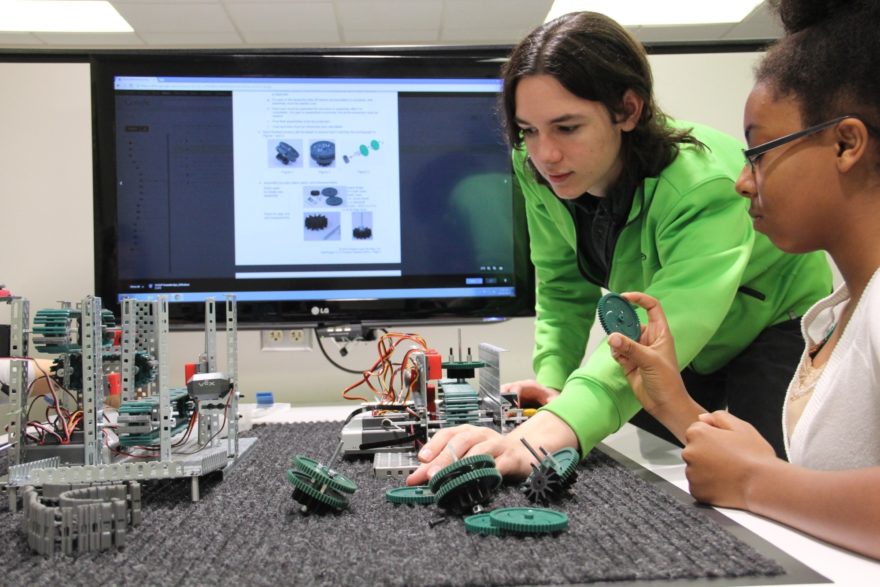 Five years ago, the leadership at Madison Consolidated Schools (MCS) in Jefferson County, Indiana, gathered a group of local business leaders to highlight progress on traditional performance indicators, such as math and reading scores. Katie Jenner, who served as an MCS administrator at the time, remembers the day clearly, because it was the day the district got a reality check.

“I remember inviting them in and being so proud of what we had to share, but what we found was that they were disappointed in the conversation,” said Jenner, vice president of K-12 initiatives and statewide partnerships at Ivy Tech Community College. “The comment back was essentially, ‘Katie, we don’t care about these scores. We need a workforce.’”

As a K-12 administrator, Jenner said that was hard to take.

“It was hard to hear our industry leaders being so critical of our system because we knew how hard our faculty members were working to improve education for our students,” she continued.

But MCS decided to use the experience as an opportunity to evaluate how they were measuring student success. First, they identified the workforce needs of their community, which resulted in a list of major industries – health sciences, engineering, entrepreneurship, and manufacturing – with opportunities for students, all based on a foundation of information technology. Then, they used data to create a dashboard tracking student progress toward those careers.

“What it did was challenge us to look beyond accountability, to build our own system to move student learning where we thought it needed to go,” she said. “We had industry leaders saying everywhere they needed IT talent.”

After building the dashboard, they looked at what they could do to move students toward success. For example, the district initiated a partnership with Ivy Tech Community College because data from the Indiana Commission of Higher Education showed students were going to college but not completing degrees.

MCS simultaneously expanded Project Lead The Way (PLTW) throughout the district to shift from just a K-12 mindset to a PreK–Career mindset. MCS first adopted PLTW Engineering in 2009 and expanded to PLTW Gateway, PLTW Biomedical Science, PLTW Launch, and PLTW Computer Science in an intentional expansion that took almost a full decade. The school doesn’t require that students take PLTW, but the response has been clear.

“Students are signing up, and parents are wanting their students to sign up,” Jenner said. “A lot of it has to do with starting in PLTW Launch and not waiting until high school.

"When we started this work," she continued, "it was very leading edge. We were building the plane as we were flying it, but we knew it was what was best for kids.”

MCS has seen results for all stakeholders involved. Students are graduating with skills, and the community is getting a skilled workforce.

“It is so paramount to have leadership that sees a vision and understands why we have to do this for students,” she said. “You have to make decisions so students can have the best life they can have. We want to build hope for them. We’re transforming, but I don’t feel like we’re doing it fast enough. When others call and ask how we’re doing it, I’m glad because we have to keep doing this for kids. We have to move faster.”

Behind the Design of the New PLTW Assessment

We Are Becoming Engineers