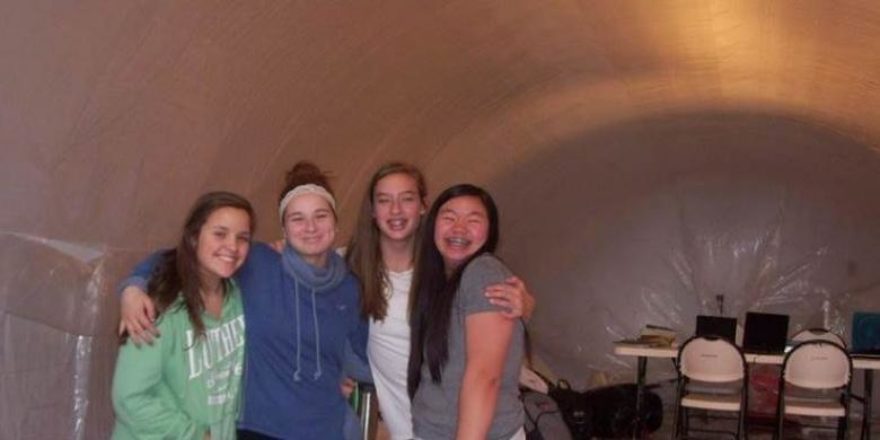 Christopher Deleon is an award-winning PLTW teacher in Hudson, Wisconsin. He has been teaching for 16 years.

A team of four PLTW Gateway students from Hudson Middle School spent a weekend on Mars to study how light affects sleep! Well, sort of.

Inspired by the movie “The Martian,” the team of students – known as “The STEM Sisters” – found out firsthand what it is like to live isolated on Mars. At the end of last year, The STEM Sisters sequestered themselves in an inflatable “Martian habitat” – or “HAB building” – that they built themselves.

Like any NASA mission, their time on “Mars” was not just for fun.

The team conducted research on the effects of light on a person’s sleep patterns. The students worked to find a way to control the amount of light and the conditions around them, as well as to minimize distractions, in order to make sure that their research was as valid as possible.

They also hope to create an awareness campaign that will educate their school and community about how the amount of light could be affecting how people sleep.

What better place to do that than on a distant planet!

Using themselves as guinea pigs, the team varied the color, intensity, and duration of light to see how it affected how tired they were and if these changes affected how they slept.

During their mission, the team had several discussions about how the light from devices such as cell phones affects how kids are sleeping. Included in these discussions: Bob Cabana, director of NASA's Kennedy Space Center; Amy McDowell, education specialist at WTI, NASA Marshall Space Flight Center; and fellow students from across the country.