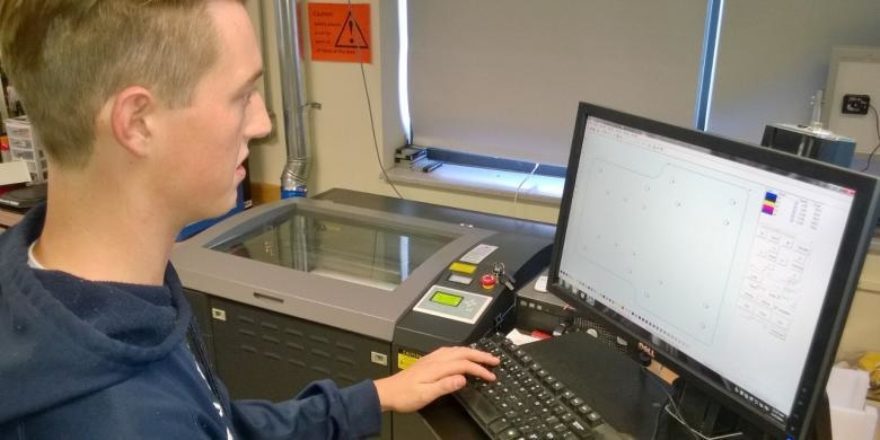 Brady Flannery, a student in Cazenovia High School's PLTW program, recently came up with an idea to make the factory system problem in his Computer Integrated Manufacturing (CIM) class easier. The Lynxmotion robots used in the course were not designed to attach perfectly with the VEX equipment that the class was interfacing it with, and so he set to the drawing board to come up with a solution, outside of class in his free time and during lunches.

As his teacher, I gave him the design constraints to make it a simple solution that was inexpensive and easy to implement. I basically gave him the tools, machines, and materials to be successful, taught him how to use the machines safely, and then stepped back to see what happened.

What happened next was something really amazing to watch. Brady took the design process he learned in Introduction to Engineering Design (IED) and implemented it in this CIM class by applying it to this project.

“I used a dial caliper to measure all of the dimensions to create a part to fit the base of the robot and its power switches,” Brady said. “I then drew several different sketches in my engineering notebook to create a design that was as compact and as practical as possible.”

Brady took his sketches, turned them into a 3-D model using Autodesk Inventor, exported them as a DXF file, imported them into a BrightStar Laser Engraver, and cut out his solution on a piece of acrylic.

“I spent several hours of my weeks altering and revising my part to make it perfect,” he said. “I then cut out a piece on the laser cutter. This piece didn’t work, so I went back to the drawing boards.”

After a few iterations and testing in the CIM classroom, the robot would easily attach to a VEX platform with plenty of room to spare.

Following this breakthrough, I contacted RobotShop, an international robotics company that supplies the Lynxmotion robotic arms used in class, and asked if they had any interest. Brady then applied to RobotShop’s Accelerator for Inventors & Developers program, and RobotShop accepted his project.

As part of the program, Brady worked with engineers at Robotshop to tweak his design and make it mass producible using their manufacturing techniques. Throughout the process, Brady had to revisit his design and justify his design choices to the engineers before proceeding. Once his ideas were vetted and he received the OK on his design, he made a few more test pieces, tested them out, then exported a file from Inventor that the company could use to mass produce the part.

Brady is remunerated by RobotShop for the work he has done for them, and the product he designed can be purchased here.

Brady is now a senior at Cazenovia High School and is a student in the Principles of Engineering (POE) and Engineering Design and Development (EDD) classes that I teach. He is also a varsity athlete for the soccer, lacrosse, and golf teams, as well as an officer in the after-school Technology Club. In the future, he plans on going to college to pursue a career in engineering and business.