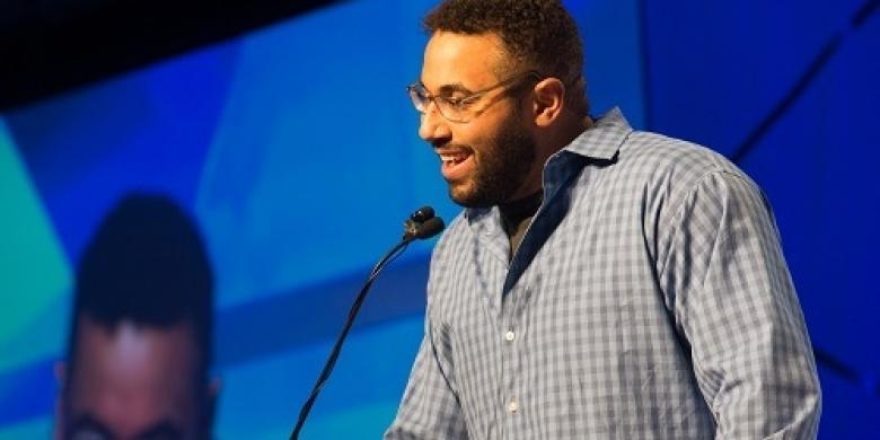 During the opening general session of PLTW Summit 2016, guests enjoyed an inspiring message from John Urschel, an applied mathematics Ph.D. candidate at MIT and NFL player for the Baltimore Ravens.

In his keynote, Urschel emphasized the value of young students getting opportunities to explore and ask questions, reflecting on how his own learning experiences shaped his career path.

“I remember when I was a kid, I hated math class,” Urschel said of his time spent in a traditional classroom setting. “I hated times tables. I did not enjoy it.”

Urschel’s love for mathematics only began to blossom when his mother encouraged him to explore and ask why.

“We would work on puzzles, we would work on problems together, and these are my fondest memories as a child,” Urschel said. “I didn't know it, but what I was learning in class – doing a thousand times tables – that wasn't math. What I was doing at home with my mother – her teaching me and showing me how to understand things, how to ask why, how to ask why a certain thing is the way it is – that's the true underlying nature of mathematics.”

This exploratory approach to mathematics not only helped Urschel understand math at a deeper level – it also got him engaged in and excited about learning.

“I think the most important thing isn't what I do. It's not that I play football; it's not that I'm a mathematician,” he said. “It's that I love what I do.”

In his address, Urschel also highlighted the crucial role teachers and mentors play in bringing learning to life, shedding light on available student opportunities, and empowering students to thrive.

"Kids are at their greatest when they have a chance to innovate." Coder, mathematician, and NFL player @JohnCUrschel #PLTWSummit
— Doug Kriedeman (@OUSDAssessment) March 20, 2016

John Urschel's key note at the #PLTWSummit was truly inspiring. An NFL football player who is pursuing his PhD in math!
— Madhura Krishnan (@madhurakrish) March 21, 2016