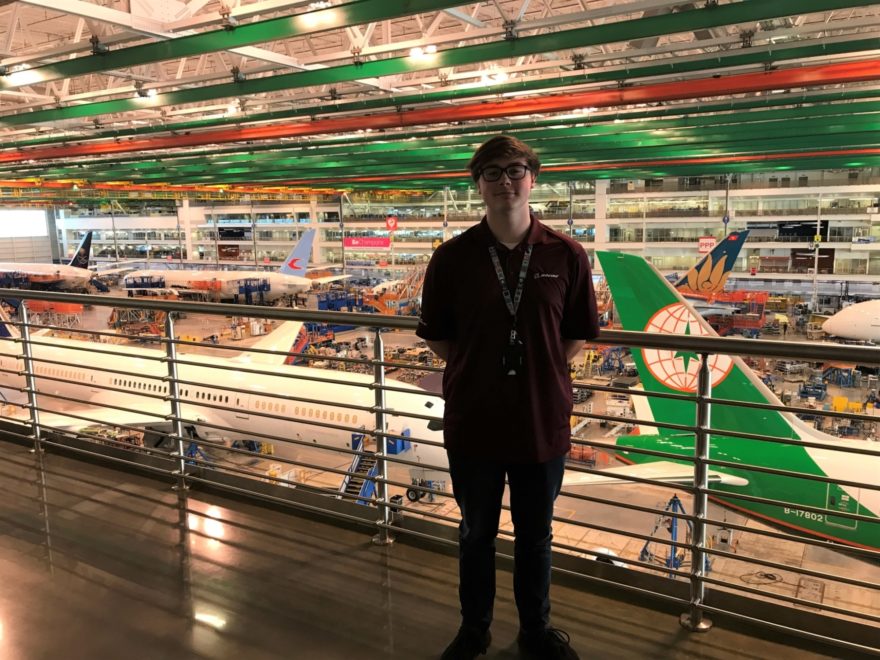 PLTW alumnus Joshua Carpenter is halfway through an impressive resume builder – a two-year apprenticeship with Boeing. “Being able to put on applications that I worked at Boeing for two years and the specific programs that we use will put me ahead,” he said.

Joshua graduated from Stratford High School in Goose Creek, South Carolina, in 2019 and currently attends Trident Technical College in Charleston, South Carolina. He began his apprenticeship as an NC programmer with Boeing South Carolina in August 2018, where he creates and modifies programs using Delmia and Catia software.

“I’ve learned a lot of hands-on stuff in regards to becoming an aerospace engineer,” he explained.

Joshua wanted to be a mechanical engineer until taking the PLTW Aerospace Engineering course. That course began to steer him in a different direction. “And then starting the apprenticeship sealed that,” he said.

“It takes away from things you might be doing as a typical high school student, but you’re doing real-world stuff,” he said.

He’s confident those choices and his hard work will pay off. He is currently taking a full load of 15 credit hours at Trident while working 40 hours per week at Boeing. When he completes the program at the end of summer 2020, he will have earned a Journeyman’s certificate “and, of course, a ton of on-the-job experience,” Joshua said.

He then plans to go on to University of South Carolina to pursue a bachelor’s degree in aerospace engineering, and possibly a master’s degree. He is thankful his PLTW courses set him on this path.

“In high school, the PLTW classes were the number one thing that I looked forward to,” he said. “They were the things that benefited me the most after high school. They were the classes where I actually learned about a field that I wanted to do.”

Apprenticeship opportunities offer schools and districts another way to extend career and technical education beyond the classroom and empower students to gain real-world industry experience. PLTW welcomes partners to engage in immersive student experiences through apprenticeship programs. To support these efforts, PLTW serves as a resource to help connect and educate partners about the possibilities with these programs, which introduce students to high-demand job opportunities; link employers to PLTW students who have the knowledge and skills to fill their labor needs; and facilitate collaboration among PLTW schools, PLTW students, and business partners. In 2018, PLTW and the U.S. Department of Labor partnered to develop the PLTW National Guidelines for Apprenticeship Standards. These guidelines provide a comprehensive apprenticeship skills and knowledge framework that schools and industry can customize to meet local apprenticeship needs. To learn more or get started on developing your school or company’s apprenticeship program, complete this form.