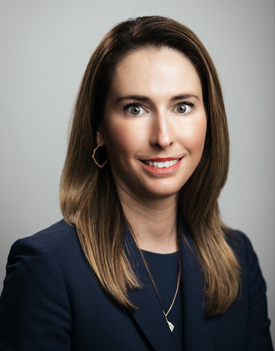 As PLTW’s Executive Vice President and Chief Strategy and Innovation Officer, Katie leads organizational strategy, and innovation. Katie previously served as Executive Vice President and Chief Administrative Officer where she led the development of PLTW’s strategic framework and North Star and supported the organization’s legal, information security, and daily enterprise operations functions. During her tenure at PLTW, Katie has also served as Vice President of Partnerships, Colleges and Universities, where she led national partnership strategy to engage colleges, universities, and other higher education leaders to expand PLTW student access to post-secondary pathways.

In addition to her work at PLTW, Katie has served as a gubernatorial appointee since July 2017 to the Indiana State Board of Education where she is currently serving her second term of service and her third term as Vice Chair. Katie also serves as Chair of the Sagamore Institute Board of Trustees. The Sagamore Institute is a nonpartisan public policy think tank providing quality, independent research and analysis from which to develop innovative and collaborative approaches to issues of public significance.

Prior to PLTW, Katie held a variety of roles with Ivy Tech Community College of Indiana as the College reinvented with a focus on career-ready education and credential attainment for Hoosiers. Both prior to and during her tenure at Ivy Tech, Katie practiced criminal law as a Deputy Prosecuting Attorney in Marion, Jackson, and Jefferson counties in the State of Indiana.

Mote holds a Bachelor of Arts in English and Spanish and a Doctor of Jurisprudence from Indiana University Bloomington (Maurer School of Law). She is married with two children and resides with her family in Madison, Indiana.